Before I take a look forward into 2022, I’d like to take a look back at 2021. Here’s some thoughts on things I built, movies I watched, books I read, and other stuff I did.

There were 2 really fun, interesting projects that I worked on this year that I’ll mention.

The first is my 13 Clues Solver, Fourteenth Clue. I wrote a blog post about it here, which I still eventually intend to update with part 2 and part 3… What was really fun about this project was considering all the different ways you could eliminate cards and possible solutions based on the questions you asked. I initially took a very brute-forcey approach, that ended up running far too long, never really finishing, and managed to optimize it down to an algorithm that could eliminate hundreds of thousands of invalid solutions in just a few seconds for 4 player games.

The other was my AI, Quesstionable Intelligence, for a game a friend came up with, Quess. He introduced the game in a group chat with some chess playing friends, and before he had a chance to ask me, I decided to build an engine to follow the rules of the game, and then create a simple min-maxing AI that would play the game without him knowing. The end result: he challenged me to a game, and I secretly let the AI play every move, and beat him handily! The most interesting challenge was trying to determine weights for pieces and positions, so the min-max algorithm could evaluate states effectively. Without ever having actually played the game, it was difficult to know whether the AI should prefer to capture pieces, or attack territory. In the end, a strategy fairly similar to basic chess min-maxing algorithms worked nicely!

In 2021 I watched a total of 145 movies, contrasted to 2020 in which I watched 150 movies from March 3 until the end of that year (I didn’t start recording until March 3rd, but I probably kept a relatively similar cadence of movies all year long, so we can assume I watched about 172 movies in 2020).

My favourite movie of the year was certainly Spider-Man: No Way Home. Seeing it on opening night was an unforgettable experience, even greater than that of Avengers: Endgame, which I thought couldn’t possibly be bested for years. Spider-Man has always been my favourite superhero, and so I definitely went in a bit hopeful, and a bit biased, but the movie absolutely delivered. I’ve seen complaints about the CGI and some of the rush storytelling, especially towards the start of the movie, but overall I loved it. There’s a lot of nostalgia in Spider-Man for me, and so this gets the top movie of 2021 for me.

Another movie I saw for the first time this year: Coherence. Astounding. This movie was exactly what I was craving after reading Blake Crouch’s Dark Matter in 2020. This movie is best watched totally blind — don’t read anything about it, if you can help it. It’s not a horror, though it’s definitely suspenseful, and unsettling. I loved it.

At the start of 2021, I set a goal for myself to read just 6 books, a big step up from the 3 I read in 2020. And, I pulled it off! On the final day of the year, no less! 2021 was really about getting back into reading for me, and so I didn’t pressure myself too much to read any non-fiction, though I did get a couple in there! I’m on StoryGraph, if you’ve got it.

My favourite book of 2021 could have been close between Susanna Clarke’s Piranesi and S. M. Freedman’s The Day She Died, but in the end it wasn’t at all, and I’ll explain why.

First, let me start with Piranesi, by Susanna Clarke. Wow. I was gripped by this. I had to force myself to put it down, so as to not devour it in a sitting, and let my mind wander about where it could be headed. It’s intriguing, it’s fanciful, and I absolutely loved learning about the House and the Other.

The Day She Died, by S. M. Freedman, had me similarly gripped. I loved the unreliable narrator angle, and though the constant jumping between past and present confused me at first, I quickly picked up on it, and loved following Eve through her recovery. Unfortunately, this book is completely marred by its awful ending. So awful, I absolutely cannot recommend this book to anybody. I wish there were a good jumping off point, to say “well, read until here, and then just stop”, but the pace picks up so quick in the last couple chapters, that there’s no way to jump off, before it runs itself off a cliff.

Other stuff I did

The biggest thing that happened to me this year (besides that thing) was moving to Vancouver! I’ve kinda wanted to get out of Ottawa for a couple years, and I didn’t really have a particular destination in mind, but did eventually want to spend some time in Vancouver. Well, with COVID making international travel difficult, and visas being annoying to deal with, it just made sense to head to Vancouver sooner, rather than later. So far, I’ve been loving it. 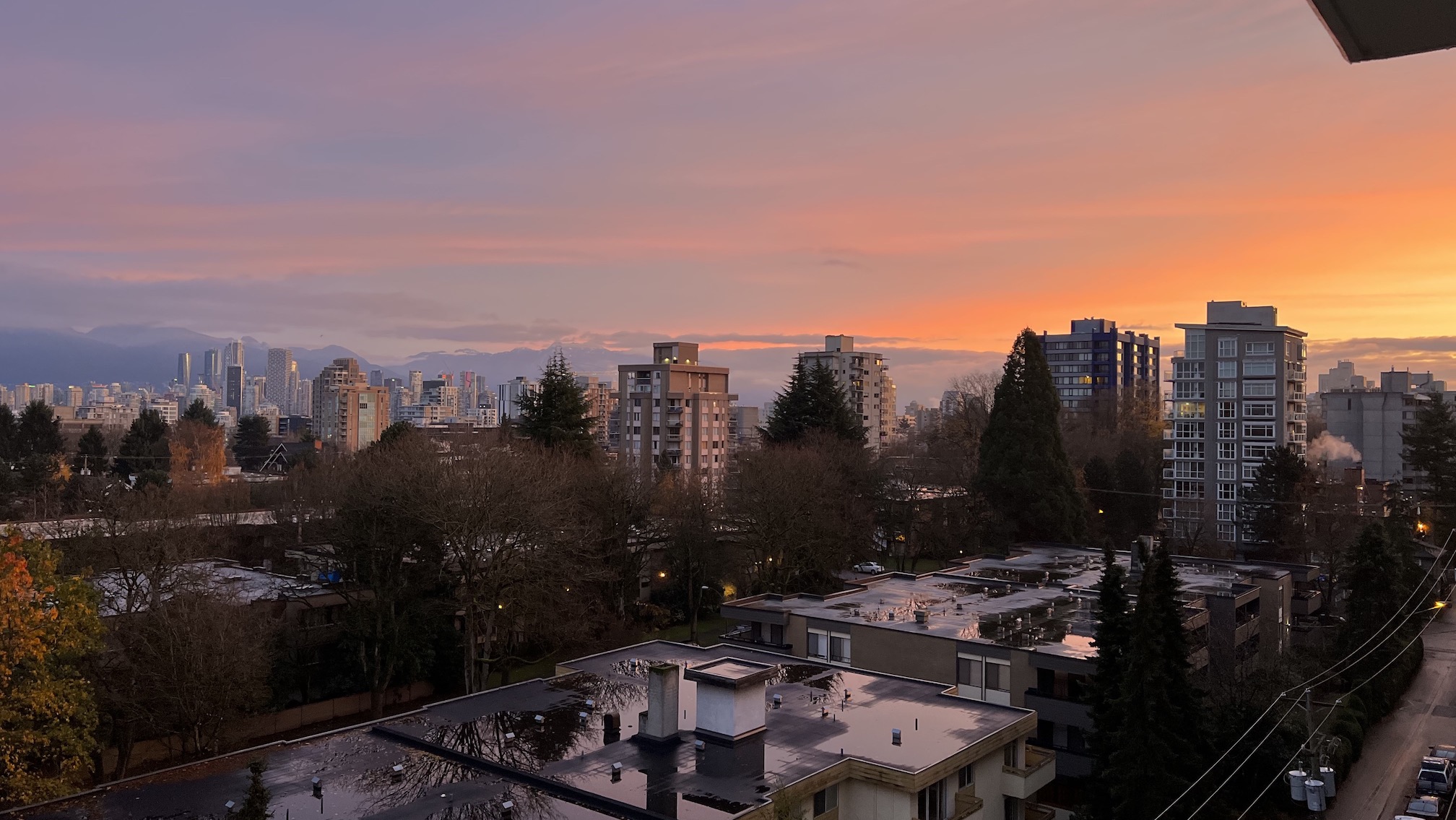 The Vancouver skyline, during a sunrise, with the mountains faintly visible in the background

I also started a new job! After working at Shopify for 3 years, I felt like I wanted to make a change, to meet new challenges, and to continue advancing in my career. In July, I started as a Senior iOS Developer at Slack, and have been really enjoying my time in my new role. I’m looking forward to what 2022 has in store for me at Slack, and what new challenges I’ll get to overcome.

Well, that’s it! 2021, in a nutshell. I hope yours was as good as mine, because, despite the state of the world, I found ways to make mine truly terrific. Thanks for reading.